Over the last few weeks local residents and councillors have been out working hard in support of the Keep Baslow Beautiful campaign. 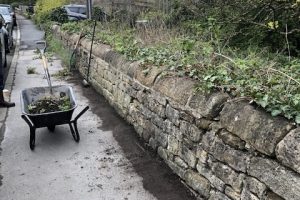 On Saturday 22 May the working party that turned up to help clear Bubnell Lane was joined by Mervyn Shepherd (who now farms at Bubnell). He scraped the edge of the road and took away all the weeds that were removed.

Bubnell Lane looks much better (pictured left), with all road edges cleared and tidied back to their original state.

Staff at the Cavendish Hotel has cut the surface vegetation back to the original edging along the footpath in front of their hotel.

DDDC Green Team swept the roads and pavements in Baslow, so the Parish Council would like to thank everyone who moved their car to help with this. 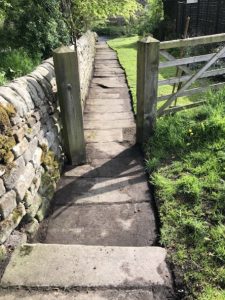 Councillor Dawson has worked hard to clear the path to the Old Ford, which has massively improved the appearance of the area and safeguarded this 200-year-old crossing (pictured left).

The litter pick on 1 June was also well attended.

The Parish Council would also like to remind everyone that they have their own equipment that can be borrowed at any time for residents wishing to litter pick their own areas.

As the growing season is in full swing, we would also like to remind residents to keep vegetation cut back from overhanging the pavements or roads, which should be cut back to the boundary.